Last weekend I drove past a Karate studio and I cringed.

Then, in a moment of self-awareness I said, “Self, why did you just cringe as you drove by that Karate studio?”

I didn’t answer myself right away, but I’ve been thinking about it ever since. And because you care, here’s what I’ve come up with. 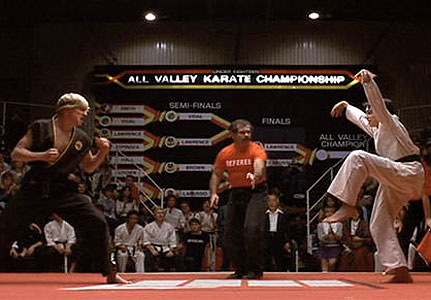 The 5 Problems I Have with Karate

1. The Studio – Not sure if I’ve ever actually been in a Karate Studio, but I’m 100% sure it smells like sweaty feet. It has to, right? Plus, every Karate studio I’ve seen in the movies has lots of mirrors, windows, and pictures of past champions from their dojo. Wait, is “dojo” a Karate word? Is “studio” even a Karate word? I have no idea. All I know is that I’ve never driven past a Karate place and thought, “I desperately want to be inside there.”

2. The Participants – Please don’t take this the wrong way, Karate people. I promise I’m not judging you with malicious intent. It’s just that growing up I don’t remember one person I ever considered being “cool” being involved in Karate. Were you cool when you were a kid, dear reader? Then you probably weren’t in Karate, were you?

Look, I’m not saying that ‘coolness’ among your junior high peers is something worth striving for…it’s just that the cool kids never took Karate.

3. The Outifts – Similar to point number one, I can’t say I ever looked at someone wearing the white robe and colored belt and thought to myself, “Man, do i want to be wearing that!” The closest I came to thinking that was at the end of Karate Kid 1, but even then I was like, “nah, still don’t want to wear a glorified bathrobe out in public”.

4. The Promotions – Congratulations! You spent months and months going to practice, fighting with other people, and letting a 40-year old guy with smelly feet yell at you for 6 hours a week. What do you get for all that? You get to exchange your white belt for a yellow one! Ooh, where do I sign up?

5. The Self-Defense Theory – The biggest problem I had with Karate people was that you couldn’t really make fun of them for being in Karate because they knew 6 different ways to rip your shoulder out of its socket. Sure, they told you that they were only allowed to use it in self-defense, that they had taken some oath or something, but we all knew the truth. They wanted nothing more than to be provoked so they could try and sweep your leg and crack your sternum like a piece of plywood.

But like I said, you couldn’t really accuse them of this or you risked catching a smelly foot in your temple.

So, what are your thoughts on the whole Karate thing?

Any of you Karate folks want to stand up for yourself, or are you already on your way over to my house to try and kill me?

Leave a roundhouse kick in the comments…