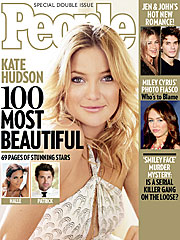 You guys aren’t going to believe this, but People Magazine has actually sifted through the faces of the world’s 6.6 billion people and have found the 100 Most Beautiful! It’s crazy, I know, but they’ve done the legwork. I know this because it says there, right on the cover, that these are the 100 Most Beautiful People.

What’s even more amazing – Most of these people are in American movies, television, and music! I know, I know, how lucky are we as Americans? The answer – very lucky.

But wait, here’s the most amazing thing of all: the cast of Gossip Girl ALL made the list. SEVEN PEOPLE! What are the odds that 7 of the World’s Most 100 Beautiful People are all on the same TV show? I don’t know, but it’s got to be at least 50,000 billion to three. Just astounding.

If you want to see the full list of The World’s Most Beautiful People, ya know, maybe to see if you’re one of them, pick up your copy of People Magazine the next time you’re buying some Ben and Jerry’s at the supermarket. Good Luck!