+ My friend Tyler Stanton is giving away a digital copy of his book for free if you join his email list. Free!!! Pretty sure he’s only doing this for a limited time, so jump on this now. The book is over 100 pages and filled with funny. You can also pick it up in paperback at Amazon for $8.99.

+ My friend Shawn Smucker has a new book out called My Amish Roots. Shawn is a fantastic writer, and in this book he traces back his lineage hundreds of years through the Amish community. You’ll hear more about it soon, but here’s his description:

The more I dug, the more interesting it became. All of the ancestors I traced, from my grandparents back, had been Amish. At least as far back as the 1700s. It’s a strange thing, having Amish roots yet never having lived in that community. Stranger yet, I started seeing pieces of my own story in these men and women whose lives, while taking place so long ago, led to mine: the women’s love for family and community; the men’s relationship with the physical landscape of Lancaster and their passion for stories. I began to wonder if, at the end of this journey into history, I might find a key that would unlock a particular part of myself, a part that would otherwise remain hidden, forever.

+ My friend Derek Webb wrote a great piece on his Tumblr about why he prefers piracy to spotify. Yeah that’s right, he’d rather you steal his music than listen on Spotify. He’s not kidding either. This kind of thinking and honesty is how he’s built up a tribe of fans over the last 15 years, and it’s why he’s one of the presenters at the Killer Tribes Conference in March. Super Early Bird rates are running out.

+ My friend Andrew Osenga is in the middle of an amazing project right now. He’s a super-talented singer/songwriter/producer who’s recording a CD called “Leonard the Lonely Astronaut” from the inside of a spaceship. Literally. (Well, almost literally.)

His kickstarter campaign to fund the CD and the building of the spaceship was successful, and folks who donated money also joined him in Nashville to build a spaceship set for him to record the entire CD in. The record is almost complete, you can preorder and get 3 free tracks here. (how great is that picture?) 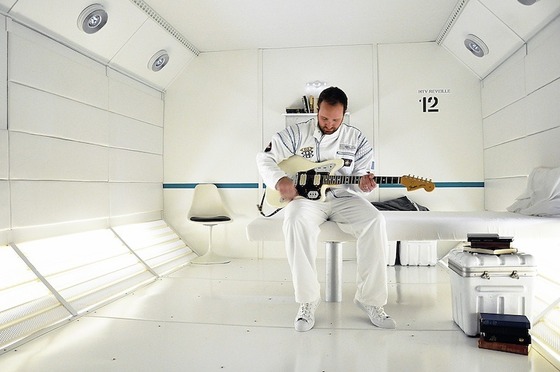 + Over at ReluctantRunners.com my friends Tyler & Tripp have a new project going on called Project Tim, and it’s all about getting some dude (who’s presumably out of shape, lazy and maybe even ugly) to train for 12 weeks to run his first 5K. Make sure you check it out.

+ As usual, the NFL is totally compelling down the stretch. In the NFC you’ve got 5 teams (Cowboys, Bears, Giants, Falcons, and Lions) fighting for 3 spots, and all 5 of them lost yesterday. And in the AFC no division is wrapped up, not even the Patriots and their 2-game lead. Will Tebow keep winning? Will the Texans hold on in the South? Will both wild cards come out of the North? Got. To. Love. It.

What about you, what’s in your Monday Soup today?