Movie: All About Steve

Where We Saw It: Rave Cinemas in Port St. Lucie, Florida. We were vacationing there last week to celebrate out 10th anniversary. 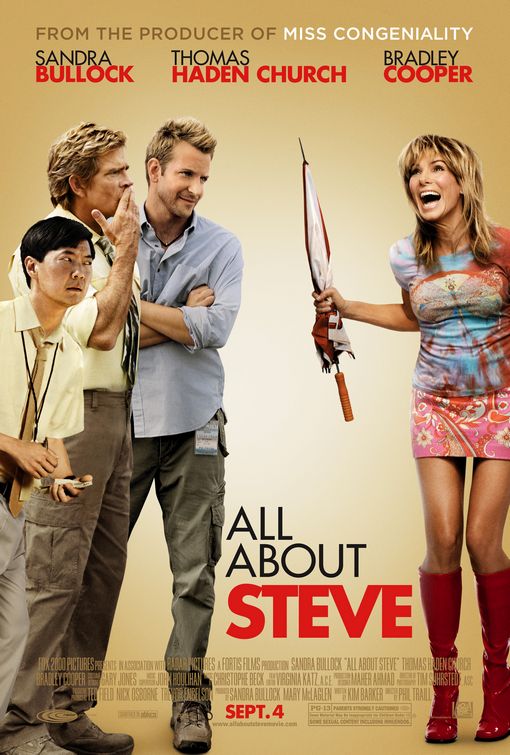 Food/Beverages Consumed: We went to the movie theater immediately after eating dinner at Chipotle, so we were the opposite of hungry. But I figured at some point I’d have the urge to eat something sweet and I had a few bucks in my pocket, so we spent $4 on a box of raisinettes. Later that night we saw the same box at Wal-Mart for 97 cents. Good times.

Movie Synopsis in Twitteresque 140 characters or less: An annoying Sandra Bullock has latched onto the charming Bradley Cooper. Can he ditch her without crushing her spirit? And will you care?

The Good Stuff: I’ve never been a big Sandra Bullock fan, but she did a pretty good job walking the tightrope of being over the top eccentric and likable at the same time. The chemistry between the 3 main dudes in the poster was pretty good as well, leading to some of the movies’ best moments.

The Bad Stuff: I’m not usually one to pick apart movies, but I couldn’t help but feel that some of the characters and their relationships were way too underdeveloped. For instance, when Thomas Haden Church’s character decided to mess with Bradley Cooper and reach out to Bullock, I had no idea why he was doing it. Was he a bad guy? Was he just a joker? It didn’t make sense in the story arc to the point where I noticed it. Also, the friendships that Bullock developed with the guy and girl from the “Pro-Leg” camp (I won’t ruin that for you) seemed way too contrived. I had a hard time caring for them or their whole sub-plot. It felt like there was about 20 minutes of footage that would have explained these characters better that was left on the editing room floor, and as a result the movie seemed emotionally disjointed. Or maybe there was something in my burrito from Chipotle.

The Ending: The ending was pretty strong and included some truly funny moments and a small twist. Nothing to write or call home about (though a text might be justifiable).

Should You spend $25 to go see it in the theaters: I can think of worse things to do with your money. Not exactly a ringing endorsement, I know, but yeah.

No seriously, Should I Go See it, Rent it, or Skip it? It’s a safe play for the theaters if there’s nothing else you want to see, but otherwise I think it’s a solid rental.

Expectations Going In: I was expecting a light, easy-to-watch movie with a few funny scenes here and there.

Cannarf Rating: Well, I got what I expected with this one. It was funny at times, scattered at others, and in the end turned out to be a fun way to spend an hour and a half of my life. The Rating: 0 cannarfs. (what’s a cannarf?)

Have any of you seen All About Steve? If so, what’s your cannarf rating?