I thought it would be fun to get some insight into the heads of some of my favorite funny people. When operating on their brains was ruled out as a viable option (what can i say? tough economy.), I decided to subject them to a series of questions about humor, faith, and swordfights. The result is The Ramblings and Such Humor Survey.

Once upon a time a boy named Jon Acuff started a website dedicated to poking fun at himself and the Christian subculture he was a part of. Over 500 posts, thousands upon thousands of readers, and one book deal later, that boy has become a man.

Okay, so maybe Jon was already a man before he created Stuff Christians Like, but now he’s a man with a fantastic writing voice and a great platform to share it from. And the best part of Jon’s story, in my opinion, is the community of readers he’s built at SCL. The open and honest interactions that take place in the comments of his posts are a testament to the authenticity and humor with which he writes on a daily basis.

1. What were a few of the things you remember laughing at the most as a kid?

JA: In high school and college the biggest comedic influence on me was the show Seinfeld. I used to tape Seinfeld on a VHS tape and watch it with my dad. That show changed the way I look at and laugh at the minute things in life.

2. What about now as an adult?

JA: I think 30 Rock is brilliant. That is one of the few shows on television that I have to rewind and watch again because the jokes are so layered that I missed some the first time. That show throws away more jokes than most shows feature. By that I mean they cram more jokes on the back end of a big joke that lots of folks miss than most shows actually have. I think Always Sunny in Philadelphia is one of the best written shows on television right now. The site for McSweeney’s is great too. I love Daniel Tosh, who is another pastor’s kid, and the Borat trailer killed me. The Soup is probably my favorite laugh fest right now.

3. Conversely, is there something that lots of other people find humorous that never really makes you laugh?

JA: I think the Office is less funny than it used to be but more than anything I find myself finding less humor in crass comedy. Seinfeld once spoke about how profanity is a shortcut to a cheap laugh and I think that’s true. Even with shows like the Family Guy and Always Sunny, I find myself turned off by the vulgarity. Maybe that’s being a dad or trying to pursue my relationship with God above my relationship with laughs. Or I’m just becoming a dork. I’m not sure yet.

4. Do you think Christians are afraid of humor?

JA: I don’t think they’re afraid, I’m just not sure laughter is viewed as a legit art form in the Christian community. And a lot of humor is mean spirited and I think that Christians have rightfully so said, “We’ve got this whole ‘love other people’ thing that this dude Jesus said that we need to obey first.” I think it’s harder to be funny without being mean but it’s worth it.

5. How do you think humor can be useful to Christianity?

JA: I think that satire can be a very honest vehicle for truth. I think that laughter opens up people and starts relationships in a really powerful way. That’s been my experience with stuff christians like anyway. 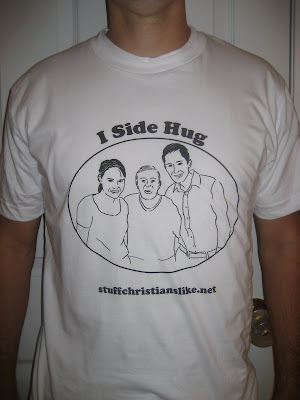 6. In your opinion, how is humor different from sarcasm/cynicism?

7. At what point in life did you really start to embrace the idea: “wow, i think I might be funny.”?

JA: 8th grade basketball team. I was horrible. I played a total of about 65 seconds that season. I quickly realized that my talents were not in my hoop skills but in my ability to: organize wicked awesome games of tag on the playground before practice in which the ground was considered lava and to be funny. I became the team comedian.

JA: Because I think that laughter is a gift from God. There’s something really special about being able to cause the happy physical response of laughter in someone else with your words. That’s fun.

9. Have you ever tried to do stand-up?

JA: I’ve never done stand up. I find it a little terrifying in some ways. I do want to do it though and when I speak at churches the first part of my material leans toward stand up.

10. Do you have a favorite quote (or joke or story) about comedy, humor, and making people laugh?

JA: I was going to quote a Bible verse from Psalms that talks about laughter mostly because that would make me look holier than the other people that filled out this survey but more than anything I keep coming back to the idea that being funny is first and foremost about being unfunny. There are over 350,000 words on stuffchristianslike.net right now and I would say the majority of them are unfunny but I really believe you have to work through those, work through a lot of words to get to the ones that are funny. Funny to me is a discipline and a willingness to lean into a laugh with some sort of foolish bravery that might only make sense to you.

Thanks for playing along, Jon!

If you want more Jon, you can check out his blog and preorder his Stuff Christians Like book, which releases in April 2010.