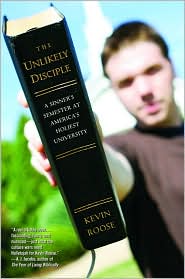 I’m Glad it Wasn’t Called: The Unlikable Disciple: A sinner punches holy people in the face for an entire Semester.

Book Synopsis in Twitteresque 140 characters or less: Ivy League non-Christian Kevin Roose spends a semester at Liberty U. pretending to be a Christian.

Where I Bought It: What do you know…another book I didn’t have to buy! Kevin Roose and Hachette were kind enough to send me a free copy for agreeing to review the book on my blog. Thanks to Matthew Paul Turner for helping me make the connection.

Paid for With: My own blood. Two and a half pints of my own viscous blood.

How Long it Took Me to Read: Just under a month. Not sure if it would classify as a true “time-maker” book or I would have made more time to read it. But I did look forward to picking it up, and don’t ever remember wishing for it to be over while I was in the middle of it. It’s a pretty long book, but it didn’t feel like it.

Who I WOULD NOT recommend this book to: A stranger holding a knife in a dark alley. Mostly because I wouldn’t recommend anything to a knife-wielding stranger in a dark alley except “put the knife away or I’ll scream like a girl”.

Who I WOULD recommend this book to: Anyone not holding a knife in a dark alley. The book really is good enough that I can say I’d recommend it to almost anyone. I think Christians and non-Christians alike will find this to be a fascinating read.

What I used for a bookmark: The packing slip the book came with from Hachette Publishing. If you haven’t noticed yet, I like to type the word ‘Hachette’.

What were some interesting true stories from the book: Kevin made a lot of great friendships during the semester, but the one I found most intriguing was the relationship he started with a girl on campus. I wish there would have been a little more about how things went with Anna, but I have a feeling Kevin got as much material as he could out of the relationship.

What were some interesting NOT true stories NOT from the book: During his semester at Liberty, Kevin translated the entire Old and New Testaments into his own version of the Bible called the Kevin Roose Authorized Unabridged Translation, or the KRAUT, for short. Goes great with hot dogs.

What was the 1 thing I’ll take from the book: Wow…this took me a few minutes to think through. I think the thing that struck me most about the book was one of the things that struck Kevin the most about his experience at Liberty. He talked often about how people were treated differently based on whether they were ‘saved’ or ‘not saved’. As a Christian, I’ve certainly been guilty of this before. I guess I’m not sure if I think it’s okay or not. On one level, we should be loving those around us no matter what they believe. But I guess how we express that love to others is going to differ from individual to individual. Anyway, I thought it was very thought-provoking.

What I learned from this book that I will apply to my next book: You’ve got to admit, the cover art for The Unlikely Disciple is amazing. I think I might go with the same idea on my book, except instead of holding a bible, I’ll be holding a box of Cinnamon Toast Crunch.

Expectations Going In: I knew the subject matter would be up my alley, but I wasn’t sure what to expect of the writing or the angle Roose was going to take.

Cannarf Rating: In the end, I enjoyed just about every aspect of this book. Roose is a great writer, and he wrote about his experiences with the tact and thought that it required to pull it off successfully. If I had to nitpick for something I didn’t like, I would say that at times it felt like he was trying too hard to make sure he didn’t offend or alienate anyone who might be reading the book. Was he was trying to make sure that Christians AND non-Christians walked away from the book with warm fuzzies? Maybe. Or maybe he just walked away from the experience with warm fuzzies himself, and that’s why it comes through in the book. In any event, it was a great read and I highly recommend it.   The Rating: +4 cannarfs. (what’s a cannarf?)

Have any of you read The Unlikely Disciple? If so, what’s your cannarf rating?